Quebec has been in the news again over recent weeks. And again it is in relation to questions of religious tolerance and religious accommodation. In this latest round of political and cultural controversy we are in the news because the government of Quebec has passed legislation that prevents those with covered faces from receiving government services.

Arguments against this legislation have been widely rehearsed over past weeks, and most opposition to the law is well founded. The Minister of Justice Stéphanie Vallé tried to argue, for example, that the law applies to anyone with a covered face, including masked protestors – as if the government is addressing a question of public security. But it is more than obvious that the government is targeting niqab-wearing, Muslim women.

It has also been pointed out, rightly, that Muslim women who wear the niqab are very few in Quebec – and, that this marginalized group will only be further marginalized by a law that cuts them off from public services. If there is a question about the wearing of the niqab in Quebec, presumably there were constructive ways to approach this as a social question, other than with the full weight of the law. Conversations with women who wear the niqab might have been a good place to start. 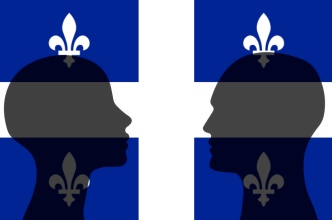 All of this is to say that I am in very real sympathy with those who object to this law. I think it should be retracted. But having said that, I also want to suggest there may be two important intuitions beneath the surface of this legislation – intuitions worth attending to.

The first relates to the significance of the face itself. As human persons in relationship, our faces disclose a great deal about who we are and what we are experiencing. Human beings have well-developed capacities to perceive and understand the significance of facial expressions, even those that are incredibly subtle. The lifting of an eyebrow, a glance of the eyes, or the pursing of lips can reveal much about the other. This is not to say that we are transparent to each other through our faces (the face also means mystery), but it is to say that our faces represent and actualize the human possibility for community, conversation, empathy, and friendship.

From this point of view, the intuition at play beneath the surface of the Quebec legislation may be that covering the face represents a tremendous loss for human community. In continuity with this, the question will also, invariably be asked why it is only women who are encouraged to cover their faces within small parts of this religious tradition? Why is it only women, that is, who are encouraged to relinquish the face to face encounter that seems basic to human community and friendship?

There may be a second intuition at play behind the scenes of this new law. Namely, that western societies must recover a more robust set of shared convictions that might shape our shared life. A defining feature of western political and legal frameworks today is the idea that convictions about truth and beauty (questions about what it means to be human) are private matters. “You have your values, and I have mine.” The role of the state in this scenario is to be a neutral referee who makes sure each person has the right to live by their private values.

There are many problems with this point of view, but a key challenge is that it provides a very thin basis for the formation of meaningful community. In fact it provides little or nothing to hold us together aside from the abstract rules that govern our interactions. In view of this, perhaps an intuition behind this new Quebec law is the intuition that we must settle on some deeper shared convictions about what it means to be human if we are to have a cohesive society that truly flourishes.

Coming full circle, these reflections certainly don’t entail support for a law that prevents niqab-wearing women from accessing public services. But they do suggest that there are important questions to be asked here – that the face to face encounter is worth a conversation.